Why did the output on the QAbstractTableModel look so strange when I accidentally omitted "if role == Qt.DisplayRole:"?

When I was working on the QAbstractTableModel Tutorial and had just added the block that formats strings into things like dates, floats, and integers, I accidentally omitted the first line of the data method block, if role == Qt.DisplayRole:.

The code still ran, but the output looked rather strange and I was wondering why this happened. This was the code that I had just added, but accidentally omitted the first line: 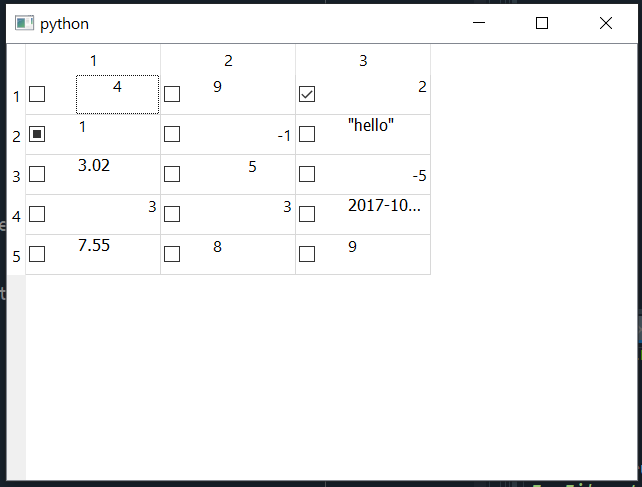 I am very curious as to why this happened - there are check boxes, check marks, and a square filled in.

Thank you for your insights!

Hey @Virginia welcome to the forum. This is a fantastic question because it gets into the details of how this all works.

The data method works by receiving an index and role and responding with instructions for the view to perform. The index says where and the role says what.

In the tutorial we cover in detail roles for outputting data (Qt.DisplayRole) and also colours (e.g. Qt.BackgroundRole) but there are other roles too, including one for showing checkboxes --- Qt.CheckStateRole (there is a complete table in the tutorial).

When you nest your code under if role == Qt.DisplayRole you ensure that you only return data for that specific role. Qt is still sending them to your method, but they are being silently ignored (functions return None by default).

When you omit that line, your method is now responding to all roles it receives with the answers that you have defined for Qt.DisplayRole -- including Qt.CheckStateRole

So why do some checkboxes show empty, some ticked and some filled with a square?

Note that these enums are just friendly ways to keep track of "magic numbers" that have special meaning in specific circumstances. But the value of Qt.Unchecked is literally just 0, if you test Qt.Unchecked == 0 you'll find it is True.

So if you created the following data method, and responded to every Qt.CheckStateRole with 2 you'll find that all fields are checked.

--- which just so happens to appear as a square in the checkbox.

Coming back to your screenshot, we can now explain why certain boxes are checked and others aren't.

The checked cells are, labeled by (row, column).

All the rest are returning something other than 0, 1, 2 but not None and are defaulting to an unchecked state.

Hope that clears it up?

Thank you very much @martin ! This is exactly the kind of information I was looking for - an explanation of what happens in the background, and it provides insight into how Model Views work in general. It's fascinating, and very helpful - I'm sort of glad I made this error because this might not have occurred to me otherwise.

@martin Great explanation that I hope will be in the next version of the book. I keep it in a corner because it was a question that tapped my mind. :slight_smile:

Why did the output on the QAbstractTableModel look so strange when I accidentally omitted "if role == Qt.DisplayRole:"? was published in faq on May 09, 2020 (updated August 12, 2022)