PySide2 vs PySide6
What are the differences, and is it time to upgrade?

If you are already developing Python GUI apps with PySide2, you might be asking yourself whether it's time to upgrade to PySide6 and use the latest version of the Qt library. In this article we'll look at the main differences between PySide2 and PySide6, benefits of upgrading and problems you might encounter when doing so.

If you're starting out and having trouble deciding, don't worry! If you buy my PySide6 ebook you get both PySide2 & PySide6 editions included. That means you'll have everything you need, whichever you end up choosing.

Qt is a GUI framework written in the C++ programming language created by Trolltech, now developed by The Qt Company. They also maintain the Qt for Python project, which provides the official Python binding for Qt under the name PySide.

The name PySide was chosen because the word side means binding in the Finnish language.

While the development of Qt started in 1992, it wasn't until 2009 that the Python binding PySide became available. Development of PySide lagged behind Qt for many years, and the other Python binding PyQt became more popular. However, in recent years The Qt Company have been putting increased resources into development, and it now tracks Qt releases closely.

The first version of PySide6 was released on December 10, 2020, just two days after the release of Qt6 itself.

Upgrading from PySide2 to PySide6

If you are considering upgrading, I recommend you try this first and see if works -- if not, take a look at the differences below and see if they apply to your project.

Let’s get acquainted with a few differences between the two versions to know how to write code that works seamlessly with both. After reading this, you should be able to take any PySide2 example online and convert it to work with PySide6. These changes reflect underlying differences in Qt6 vs. Qt5 and aren't unique to PySide itself.

If you’re still using Python 2.x, note that PySide6 is available only for Python 3.x versions.

In Qt6 the QAction class, which is used for creation toolbars and menus, has been moved from the QtWidgets to the QtGui module.

This may seem strange, but the move makes sense since actions can also be used in QML (non-widgets) applications.

Finally, platform-specific methods in the QtWin and QtMac modules have been deprecated, in favor of using the native calls instead. In PySide applications the only likely consequence of this will be the setCurrentProcessExplicitAppUserModelID call to set an application ID, for taskbar icon grouping on Windows.

snake_case and the new true_property

PySide2 introduced the snake_case feature to write Qt method names – like .addWidget() – in a Python-friendly snake-case style like .add_widget(). This allows your PySide code to follow the Python standard PEP8 style.

Introduced in PySide6 is a new feature which allows direct access to Qt properties as Python object properties, eliminating the setter and getter methods. This can be enabled explicitly on a per-module basis by importing the true_property feature.

The example below demonstrates the effect on PySide6 code of applying both these features.

As you can see, the true_property feature allows you to assign a value to a Qt property directly – rather than using setters.

In the pre-PySide6 code, you could only do .setEnabled(False) to set the enabled property of a widget to the value False, hence disabling the widget. However, with true_property enabled, you can set a property directly with, for example, button.enabled = False. While this may seem like a cosmetic change, following Pythonic style in this way makes code easier for Python developers to understand and maintain.

Let’s demonstrate how these two features could be valuable in your PySide6 code.

The .exec() method in Qt starts the event loop of your QApplication or dialog boxes. In Python 2.7, exec was a keyword, meaning that it could not be used as a variable name, a function name, or a method name. The solution used in PySide was to name the method as .exec_() – adding a trailing underscore – to avoid a conflict.

Python 3.0 removed the exec keyword, freeing up the name to be used. And since PySide6 targets only Python 3.x versions, it currently deprecates the workaround name and will later remove it. The .exec() method is named just as in Qt itself. However, the .exec_() name only exists for short-term backward compatibility with old code.

If your code must target PySide2 and PySide6 libraries, you can use .exec_(), but beware that this method name will be removed.

The complete guide to building GUI applications with PySide2. From the basics of creating a desktop window to the key features you need to build real apps. 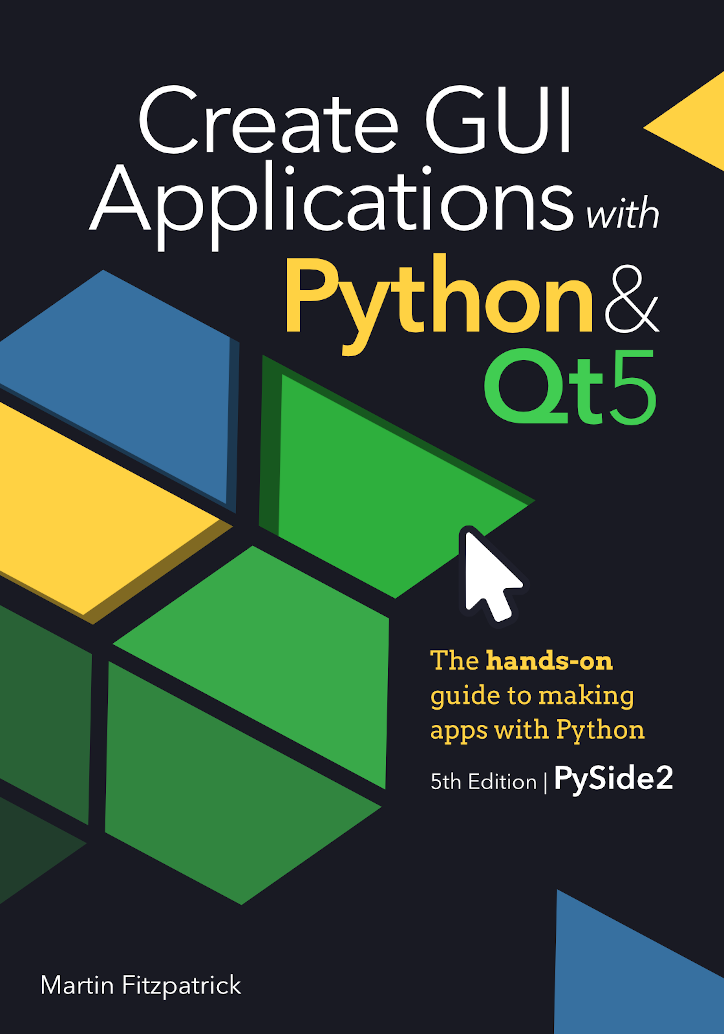 This isn’t a concern anymore, but when Qt6 was new, not all of the Qt modules had been ported yet, and so were not available in PySide6. If you needed any of these modules, the upgrade to PySide6 was not desirable then. Fast forward to Qt 6.2 and PySide 6.2, the good news is that all of those missing modules are now back. You can upgrade with no hesitation.

Is it time to upgrade?

Whether or not it's time to upgrade depends on your project. If you're starting out learning PySide (or GUI programming in general), you may prefer to stick with PySide2 for the time being as there are more examples available for PySide2 online. While the differences are minor, anything not working is confusing when you learn. Anything you know using PySide2 will carry over when you choose to upgrade to PySide6.

However, if you're starting a new project and are reasonably familiar with PySide/Qt, I'd recommend jumping into PySide6 now.

If you want to get started with PySide6, the PySide6 book is available with all code examples updated for this latest PySide edition.

If you're developing software that's targeting both PySide2 and PySide6 you can use conditional imports to import the classes from whichever module is loaded.

If you add these imports to a file in the root of your project named qt.py. You can then, in your own code files import use from qt import QtWidgets and the available library will be imported automatically.

Note however, that importing in this way won't work around any of the other differences between PySide2 and PySide6 mentioned above. For that, we recommend using the QtPy library.

If you need to support all Python Qt libraries (PySide2, PySide6, PyQt5, PyQt6) or are dependent on features which have changed between versions of Qt, then you should consider using QtPy. This package is a small abstraction layer around all versions of the Qt libraries, which allows you to use them interchangeably (as far as possible) in your applications.

If you're developing Python libraries or applications that need to be portable across different versions it is definitely worth a look.

As we've discovered, there are no major differences between PySide2 and PySide6. The changes that are there can be easily worked around. If you are new to Python GUI programming with Qt you may find it easier to start with PySide2 still, but for any new project I'd suggest starting with PySide6. It is an LTS (Long Term Support) version. If you’re not upgrading for the benefits, which are not significant, do it for the long-term bug fixes.

When you start building apps that display long documents, large amounts of data or large numbers of widgets, it can be difficult to arrange things within a fixed-size window. Resizing the window beyond the size of the screen isn't an option, and shrinking widgets to fit can make the information unreadable. More